Originally released in Japan back in June, the PS3 exclusive Tokyo Jungle finally makes it’s way onto Playstation Network. Coming from the team at Playstation C.A.M.P., Tokyo Jungle is a survival action game that revolves around animals in post-apocalyptic Japan. While a few things fall flat, Tokyo Jungle is surprisingly addicting and provides exciting action. 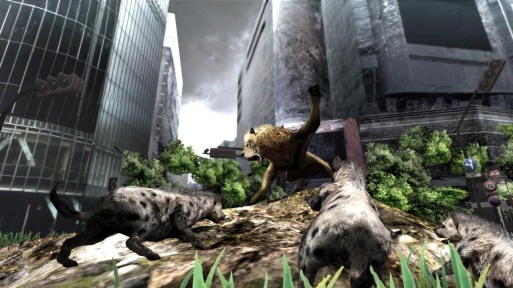 Mankind is extinct, the once vibrant city of Tokyo is rotting away and now animals must fend for themselves. Everything from lions, tigers, hippos, and beagles roam the streets. The main story campaign in Tokyo Jungle follows a once spoiled Pomeranian who now must learn how to fight for himself. The story really doesn’t evolve or go anywhere exciting and the ‘true ending’ the game gives you is less than satisfying. That being said, the main star in Tokyo Jungle is it’s survival mode.

Tokyo Jungle’s survival mode is addicting and exciting. In survival mode, your goal is to survive as long as you can. You do this by taking over territories, hunting down other animals to rank up and then finding a mate to

create a new generation. This may sound simple but each objective has it’s own challenge. For example, there are different levels of mates, desperate, average and prime. Prime gives you three offspring, average gives  you two and desperate only provides one. The more offspring you carry, the longer you’ll be able to survive in the next generation but, in order to mate with the Prime you must be ranked high enough. This mechanic, among other ones, really add a variety of strategies to the game, allowing enough room for you to experiment.

Tokyo Jungle does an excellent job of constantly giving new challenges and rewards to go for. For each play through of survival, you’ll be able to take on up to twenty different challenges which all have different rewards. Some of the rewards are basic, such as medicine but certain challenges reward you with a new animal to play with. It’s rather addicting to keep unlocking new animals and going through survival mode with them. With well over twenty animals to unlock, that alone is enough to keep you busy for a very long time.

Tokyo Jungle may look a bit absurd from afar but it’s addictive gameplay and consistent rewards  will hold anyone’s attention for quite some time. It’s defiantly the stand-out on the PSN this year and with the asking price of only fifteen dollars, Tokyo Jungle is hard not to recommend. Tokyo Jungle is available for download now on PS3’s Playstation Network.