“Mirror’s Edge” is a game that thinks outside the box, while it relies heavily on its art design, the gameplay is fast paced and a joy to play. With an interesting story and world to explore and a great protagonist and excellent art direction, “Mirror’s Edge” is a game that tries something new, without fear, even though there are some notable errors. 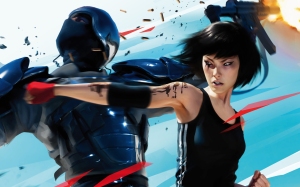 Mirror’s Edge takes place sometime in the near future in an unnamed “utopian” city. Crime, freedom of speech, and individuality are all non-existent in this city. Buildings are solid white and blue with only highlights of prime colors.  This “comfortable” life is provided by a totalitarian regime that controls the media and everything else in the city. You play as Faith Connors, a runner. Runners are vigilantes who fight against the controlling system by exchanging information to expose the power hungry government. A man named Robert Pope begins to challenge  Mayor Callaghan for office. Pope knows how dirty the government’s hands are and plans to change things for the better. One morning, Pope turns up dead, shot in the head. Faith’s sister Kate, who’s a cop, is framed for the murder. Faith is faced with the challenge of proving her sister’s innocence in totalitarian world. The closer Faith gets to the truth, the more she realizes Pope’s murder is a part of a much bigger plan by Callaghan. The game asks the player how much freedom are they willing to give up for a comfortable life? While the ending to the story doesn’t really satisfy the questions the player has, the story is a thrill ride, filled with twists and turns.

The presentation of Mirror’s Edge is one of its strong points. The bold art design is refreshing and a joy to play through. Buildings filled with whites and blues and splashes of bold, primary colors. This not only looks good, it also sells the fact that you are living in a totalitarian world. Also, certain colors have meanings behind them. Red is the color of runners. Through out the game the color red will point you in the right direction. For example, if there two poles on a building and one is red and one is white. Usually the red one means thats the clear path to take as a runner. This idea in the game is sold well. While it may be overused, its still very well done. While the gameplay of the Mirrors Edge has a great art design behind it, the cutscenes aren’t as flattering. The cutscenes are 2D animated sequences in the same style of a certain insurance commercials. But despite the cutscenes having a bland style, the core gameplay has excellent presentation.

The gameplay in Mirror’s Edge is still one of a kind and is like nothing you can find today. The game breaks down into platforming and shooting. You spend most of your time jumping from rooftop to rooftop, climbing and scaling walls and breaking into government buildings. You also join in combat against police and government agencies. You can either take them on hand-to-hand or you can take one of their weapons and shoot back. Of course what makes this all unique is that this all takes place from the first person view. While it may be disrupting to some, rolling and jumping off buildings from the first person view is a true treat and a blast. While there are some instances where Faith doesn’t grab a ledge or reacts a bit slow to your controls, these are far and few in between. But, the first person shooting and hand-to-hand combat mechanics are behind those of modern first person shooters. Its a bit sluggish and awkward but you soon get used to it. Luckily you only fight waves of police in the last 2 levels of the game. While there are some notable problems with the first person combat of the game, the platforming is well crafted and jumping off buildings never really gets old.

There is one more big problem with Mirror’s Edge. The actual game will only take around 4 hours to beat. Yes, four hours. While there are time trails and time challenges to try, the actual campaign is disappointingly short. Mirror’s Edge, currently is only twelve dollars at stores and it is worth every penny. But if was a sixty dollar game again, I’m not sure if I can recommend it to everyone.

Ultimately Mirror’s Edge is an unique experience with fun gameplay and an interesting story and world to explore. I love Mirrors Edge, the art design is incredible, and jumping off buildings is beautiful. The soundtrack as well is excellent. Mirror’s Edge is a game ready to be loved and played if you are willing to give it a try.